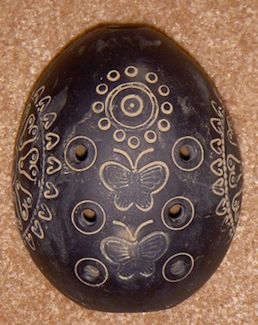 Xun is one of the oldest musical instruments found so far in China with a history of more than 7,000 years. The instrument has been found along the Yangtze River and the Yellow River at Neolithic sites, and was believed to be very popular in ancient China. The Xun was made of baked clay by the legendary Bao Xin Gong or by Fuxi, the first male ancestor in Chinese myth. It falls into the category of Earth in the traditional bayin classifications of musical instruments based on eight kinds of materials (metal, stone, silk, bamboo, gourd, earth, hide and wood.) The oldest Xun unearthed so far was a single-finger-hole type about 7,000 years old, found in the site of Hemudu Village, Zhejiang Province. The instruments with 1 to 5 ginger holes were from sites like Banbo Village ( Xian, c. 5,000-3,000BC ) and some others. Xun flutes, in various periods, were in the shape of an olive, a ball, fish or an egg, most with flattened bottoms. It's construction came to be standardized in the Shang dynasty (1766-1122 BC), generally pear-shaped with five finger holes, three at the front and two at the rear. Later types with several finger holes were melodic, mainly used in the court traditions, and by the common people as well.