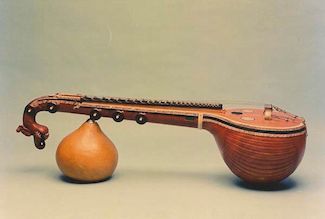 The veena is one of the most ancient string instruments of India. Its origin can be traced back to the ancient yazh, a stringed instrument, similar to the Grecian harp. Bharata, in his Natya Shastra, explains the theory of the 22 srutis in an octave with the help of two experimental veenas.

The veena then went through several innovations and modifications. In its current form, the instrument can be attributed to Raghunath Nayak ( circa 17th century ) of Tanjavur in Tamil Nadu.

The veena is 1.5m long and is made from jackwood. It has a large, round body with a thick, wide neck, the end of which is carved into the head of a dragon. A small resonator is attached to the underside of the neck. The veena has 24 metal frets embedded in hardened bees-wax, mixed with charcoal powder.

Melody is produced on four metal strings that run above the frets. These are stretched over a wide bridge that sits on the body of the veena. Three other strings run alongside the neck of the instrument. These are used for maintaining time and for playing the drone. The performer, who sits cross-legged on the stage, rests the small resonator on the left lap. The fingers of the left hand are used to press, pull and glide on the frets, while the fingers of the right hand are used to pluck and twang the strings.

The veena is a complete instrument and provides the basic components: sruti, laya and sahitya. Its main attraction is the mellow tonal quality which is capable of evoking a meditative atmosphere.