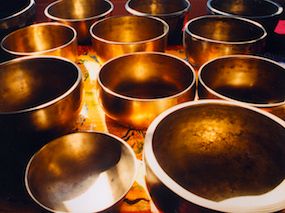 A type of resting gong or standing bell, the singing bowl is gaining widespread use throughout the world, Singing Bowls ( aka Tibetan Singing Bowls ) have evolved as one of the most popular tools used in sound therapies. Their uses, traditionally from the countries they originate from, varies from culture to culture. For example, in the Himalayan regions, they are used by shamans and clergy from the Buddhist, Bon, and Sufi communities. In India, they are used more as a meditational aide, and only recently, as a sound therapy tool, due to their popularity in the West. Their use for healing in the Himalayas, is much older than their Indian counterparts, contrary to what is told on the internet. Generally, in Nepal for example, Singing Bowls are not placed directly on the body, but over the past decade, they have adopted this practice from the West. Sound is an ancient study regarding transformation in the East, and predates western concepts by centuries. Oral traditions can date back nearly 18,000 years, and written transcripts have been found in Turkey, and other countries extending all the way to Mongolia, composed over 1,000 years ago. Singing Bowls are also used in China, Southeast Asia, Japan, South Korea, and Kashmir as Temple instruments. And we see the use of Singing Bowls in the cultures of Afghanistan, Pakistan, Mongolia, Philippines, Vietnam, and Bhutan.

Western uses include meditation, which has nearly 100 healthful benefits from stress reduction to increasing blood flow and lowering heart rate; to aiding the immune system and improvement for fibromyalgia and even psoriasis in patients who meditate. So the mere act of listening to a Singing Bowl can be quite beneficial. Documented studies in Europe, show that the benefits of using Singing Bowls as a massage tool, coupled with their sound benefits, supports medical treatments for abdominal and digestive issues, heart conditions, damaged spinal discs and bone joints, and blood circulation issues. In Germany for example, they are used by qualified therapists in obstetrics, retirement and nursing homes, schools, speech therapy, and working with the handicapped and the care of the dying. Because traditional medical systems abroad, have included Singing Bowls in their research studies, their employment as a healing aide is more widely accepted than in this country.

It has only been in the last 2 decades that a small number of controlled medical studies in this country, have looked at Singing Bowls as a therapy. The environment of healing with these instruments is generally practiced by amateurs who believe that just by hitting a bowl, they are somewhat qualified as a medical practitioner. This is nothing more than an illusion on their part, and short changes the efforts by others who have sought out teachers who have studied abroad in the Himalayas or Europe. It is not the mere hitting of a Singing Bowl that initiates transformation, but the application of Skillful Means in conjunction with the Singing Bowls. A trained Singing Bowl practitioner is not just striking the bowl, but initiating an intentional effort that has been handed down through centuries of Oral Traditions. This dynamic of Sound, Vibration, and Skillful Methods can have a direct effect on people who have physical and mental health concerns. Singing Bowl therapy is an excellent compliment to traditional therapies, including Naturopathic and Holistic applications. ( Please note, Singing Bowls did not originate in Tibet, and very few were historically made there. So anyone who refers to them as Tibetan in origin, is either misinformed or is using misleading information insinuating esoteric implications. The term ' Tibetan Singing Bowl ' is simply the result of " branding " or semiotics ).

Because we hear not only with the ears, but the skin and bones as well, the vibrational effects and the harmonic sounds can influence every aspect of the body including brain states. Their effect on tissue cells, and neural pathways of the brain are just being understood. In Eastern medical circles, illness is looked at being 75 percent mental, which is a complete opposite of how illness is looked at in this country. For the sake of argument then, if illness is 75 percent mental, then any agent that can affect the nervous system, brain waves, blood circulation, heart rate, respiration, etc., would greatly influence the mind. Through this action, the mind can then influence the patient's well being, encouraging a positive outlook, fortifying resolve, and regulating bodily functions; including the production of endorphins, the body's natural painkillers. Is it any wonder, that when patients facing life threatening illnesses who are hospitalized, receive mental health counseling? Singing Bowls are capable ( by trained practitioners ) of influencing the Autonomic Nervous System, particularly the Parasympathetic Nervous System which is our ' rest and digest ' response, in contrast to the ' fight or flight ' response. Stimulation of the PNS decreases blood pressure, aids digestion, helps to metabolite sugar ( diabetes issues ), and can rest the mind to the point where a deeper spiritual awareness can manifest. Dissonance studies using Singing Bowls, has shown to be effective to children with ADD and ADHD. Certain techniques using Singing Bowls can produce magnetic effects which have been shown in clinical studies to increase tissue phosphorylization, which aids in fibroblast proliferation and the healing of tissue. Magnetics increases the level of alkaline phosphatase at fracture sites, which expedites healing of fractures. It affects the membranes of red blood cells, decreasing rouleaux formation and increasing oxygenation of tissue.