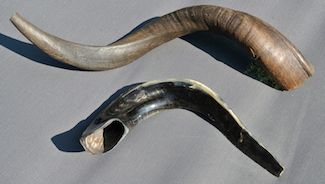 The ram's horn used in commemoration of the sacrifice of Isaac by the Hebrew's. The last moment before Abraham was to sacrifice his son Isaac, a ram caught in a thicket was used as a substitute sacrifice. To honor the ram, Jews use a ram's horn at religious services.

Horns from cows were rejected because these animals were associated with the worship of the golden calf by the Children of Israel in the desert, a sin vigorously condemned by Moses.

Originally, the blowing of the shofar was a Temple ritual; it later became a Synagogue ritual. According to the Mishna, two different forms of shofar were used in the Temple: one made of Ibex horn and sounded at New Year's and during Yovel Days; one made of ram's horn, and sounded on fast days. In earliest times the shofar was used as a musical instrument. Its most important uses as described in the Bible were to intimidate the enemy, to declare war, and to call the populace to assembly. Apart from its liturgical uses the shofar was closely connected with magical symbolism. Its blast destroyed the walls of Jericho, and in the Dead Sea Scrolls we read that during battles, shofar blowers sounded a powerful war cry to instill fear into the hearts of the enemy while priests blew the "six trumpets of killing".

Historically the shofar was used during rites to bring rain and used in the event of local disasters. In modern times its liturgical use is restricted to Rosh Hashanah and Yom Kippur.

There is three sound patterns established for blowing the shofar: tekia, terua, and shevarim. Tekia is a long blast, terua is 9 staccato notes, and shevarim is 3 undulating or wavering sounds.

* The Ibex is almost extinct, and shofars are now made from Kudu horn.