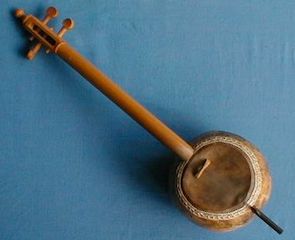 The Rebab is a 3 stringed musical instrument. Two of the strings are metal wrapped around silk, and one is of horse tail. The instrument is mostly played on the horse hair string. It is played with a bow. The bow is also made of horse hair. The body is made of coconut and generally covered with catfish skin.

Its origins is in Central Asia. According to some rumors, Rumi himself played the rebab.

The Rebab, or spike fiddle, was first played around the 8th century by Arabic musicians and is a predecessor to the violin. Believed to be the main instrument of the early “troubadours” a word with striking resemblance to the Arabic word “tarab,” which translates to “mirth” or “joy” in English.