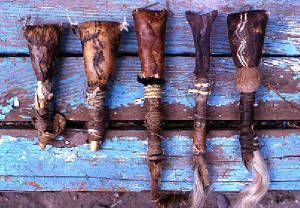 One of man’s earliest sound instruments, and a style in some form, is found in nearly every culture. The Rattle is a type of percussion instrument which produces a sound when shaken, and is listed in the Hornbostel-Sachs system as a ‘shaken idiophone.’ In many cultures the Rattle accompanies many religious rites, ceremonies, and is associated with the supernatural. Many forms of the Rattle exist, and can be hung from the ankle, leg, arm, or neck of a dancer for example. Many people are familiar with the hand shaking type, and the earliest form was probably the gourd.

In early societies, it was used to drive off evil spirits. In Native American circles, it as seen as a representative of the 3 Kingdoms of the Animal, Mineral, and Plant; and realize that a spiritual energy can be derived from it’s sound, which can clear the mind.

Many shamanic traditions utilize the Rattle, and it has many uses, too many to explore here. But it’s use in ceremonies, dances, and rituals extends from the distant past to the present.

There are many varied uses of the Rattle amongst the cultures of the world. From the sistrum of the Egyptians to the moth cocoon rattles of Africa, to the turtle rattles of North America their function, symbolism, and use varied from culture to culture. Rattles have a direct connection to ceremony and ritual, and were used in many shamanic traditions as well. For example, in Native American societies, rattles could signal changes in dance protocols, or in song. Sometimes being used to usher in powerful medicines and to promote healing. Rattles can connect us profoundly to ourselves and can become quite personal. Representing the spirits of the air in some cultures, rattles could cut through imagined energy lines, or disperse unwanted energetics.