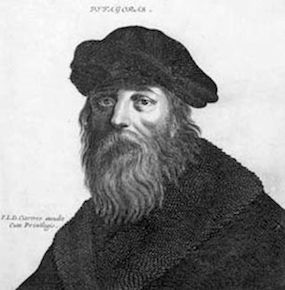 He was a Greek philosopher who was responsible for important developments in the history of mathematics, astronomy, and the theory of music. He founded the Pythagorean Brotherhood and formulated principles that influenced the thoughts of Plato and Aristotle. The influence of Pythagoras is so widespread, and coupled with the fact that no writings of Pythagoras exist today, this short article will attempt to guide the reader through the life of this most remarkable teacher.

He traveled widely in his youth with his father Mnesarchus, who was a gem merchant from Tyre. His family settled in the homeland of his mother, Pythais, on the island of Samos, where he studied with the philosopher Pherekydes. He was introduced to mathematical ideas and astronomy by Thales, and his pupil Anaximander in Miletus when he was between 18 and 20 years old. Thales advised Pythagoras to travel to Egypt to learn more of these subjects. Leaving Miletus, Pythagoras went first to Sidon, where he was initiated into the mysteries of Tyre and Byblos. It is claimed that Pythagoras went onto Egypt with a letter of introduction written by Polycrates, making the journey with some Egyptian sailors who believed that a god had taken passage on their ship. Arriving in Egypt, Pythagoras tried to gain entry into the Mystery Schools of that country. He applied again and again, but he was told that unless he goes through a particular training of fasting and breathing, he cannot be allowed to enter the school. Pythagoras is reported to have said, " I have come for knowledge, not any sort of discipline." But the school authorities said," we cannot give you knowledge unless you are different. And really, we are not interested in knowledge at all, we are interested in actual experience. No knowledge is knowledge unless it is lived and experienced. So you will have to go on a 40 day fast, continuously breathing in a certain manner, with a certain awareness on certain points." After 40 days of fasting and breathing, aware, attentive, he was allowed to enter the school at Diospolis. It is said that Pythagoras said,"You are not allowing Pythagoras in. I am a different man, I am reborn. You were right and I was wrong, because then my whole standpoint was intellectual. Through this purification, my center of being has changed. Before this training I could only understand through the intellect, through the head. Now I can feel. Now truth is not a concept to me, but a life."

He spent the next 22 years perfecting himself in mathematics, astronomy, music, and was initiated into the Egyptian Mysteries. When Cambyses II, the king of Persia invaded Egypt in 525BC, he made Pythagoras his prisoner and sent him to Babylon. He utilized this misfortune as an opportunity for growth, and for the next 12 years he studied with the Magi and was initiated into the Chaldean Mysteries. Leaving Babylon, he made his way through Persia to India, where he continued his education under the Brachmanes. At that time India was still feeling the effects of the spiritual revival brought about by Gautama the Buddha. Although Pythagoras arrived in India too late to come into personal contact with the Buddha, he was greatly influenced by his teachings. He went to India a student, he left it as a teacher, and even to this day he is known in that country as Pitar Guru, and as Yavanacharya, the Ionian Teacher.

Pythagoras was 56 years old when he finally returned to his homeland. When he arrived in Samos he found the island crushed and ruined, its temples and schools closed, its wise men fleeing from the tyranny and persecution of the Persian conquerors. Instead of being welcomed by his countrymen, Pythagoras found them indifferent to the wisdom he was eager to impart. He left Samos and went to southern Italy, settling in Crotona, a town situated on the Gulf of Tarentum. He was invited to speak before the Senate of Crotona, and so greatly impressed them with his wisdom, that they decided to build him an institute, which would serve as a school of philosophy and an academy of science. Although it was understood that it would be patterned after the Mystery Schools, there was nothing about the place suggesting secrecy save a statue of Hermes Trismegistus at the door of the inner school with the words on the pedestal: "Let no profane enter here."

The institute was comprised of three orders. The outer order was called the 'akoustici', who lived in their own houses only coming to the institute during the day. They were allowed their own possessions and were not required to be vegetarians. Acceptance into this outer society was granted after a 3 year probationary period. Both men and women were permitted to become members of the order, in fact 28 women were admitted to the institute. The inner order of the society was called the 'mathematikoi', who lived permanently with the society, and had no personal possessions and were vegetarians. They were taught by Pythagoras himself and obeyed strict rules. The third level of initiation within the institute was the 'electi', who were instructed in the secret processes of psychic transmutation, how to heal with sound, and lived a strict discipline in accordance with the code of the Great Mystery Schools.

The daily life of a student at Crotona followed a strict schedule. At sunrise they engaged in meditation, pronouncing a mantram on a certain tone. They reviewed all their actions of the previous day and planned the coming day in full detail. After breakfast they took a solitary walk and went to the gymnasium for exercise. The rest of the morning was spent in study. At noon the Order ate together in small groups dining on bread and honey. After lunch students could receive their relatives and friends in the gardens of the institute. This was followed by another walk in the company of other students. At the close of the day, they ate together and read aloud. Before retiring each student again meditated and chanted his evening mantram. Those who were unable to stand the discipline left the school and went out again into the world. Even in the higher degrees of the institute, some occasionally failed by breaking their pledge of secrecy or some other rule which bound them. These students were expelled from the institute, and a tomb bearing their name was erected in the garden. Pythagoras taught that such a student was dead."His body appears among men," he said, " but his soul is dead. Let us weep for it! "

In Astronomy Pythagoras taught that the Earth was a sphere at the center of the universe. He recognized that the orbit of the moon was inclined to the equator of the earth, and he was one of the first to realize that Venus as an evening star, was the same planet as the morning star. He taught that the movements of the planets traveling through the universe created sounds, and could be perceived by those who were trained to hear them. This music of the spheres could be replicated using a single stringed instrument called the monochord. Pythagoras used the monochord to explain musical intervals and harmonics to his students. He taught how harmony may be produced when tuning the high and low notes in the octave, thereby laying the foundation for many of the theories and teachings that have come down through the musical traditions.

Pythagoras observed that when a blacksmith struck his anvil, different notes were produced according to the weight of the hammer. That if you take 2 strings in the same degree of tension, and then divide one of them exactly in half, when they are plucked, the pitch of the shorter string is exactly one octave higher than the longer string. He also discovered that if the length of the 2 strings are in relation to each other 2:3, the difference in pitch is called a fifth. Pythagoras stressed that different musical modes have different effects on the person who hears them, and that music could be applied to healing illness both mental and physical. In 513BC he went to Delos to nurse his old teacher, Pherekydes who was dying. He remained at his bedside playing his lyre and feeding him until he died. In 508BC the Pythagoreon Society at Croton was attacked by Cylon, a noble of Croton itself. Pythagoras escaped to Metapontium and most authors say he died there. Evidence is unclear as to when and where the death of Pythagoras accurred.

The beliefs that Pythagoras held were:

1) that at its deepest level, reality is mathematical in nature

2) that philosophy can be used for spiritual purification

3) that the Soul can rise to union with the Divine

4) that certain symbols have a mystical significance

Pythagoras was the first to call the heavens a universe and the earth round. That the Soul was immortal, and that it changes from one body to another. The Pythagorean Brotherhood was one of the worlds earliest unpriestly cooperative scientific societies, if not the first, and that its members invented the multiplication table, and raised important scientific problems which were solved 15 centuries later.

The Book of Secrets- Osho

Pythagoras and the Pythagoreans- Arthur Fairbanks

Pythagoras and His School- Raghavan Iyer 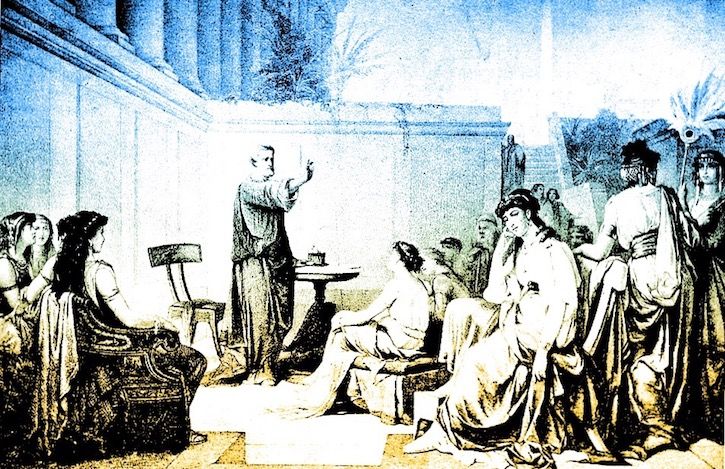