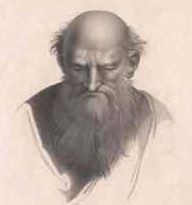 An important mathematician in the ancient world and is best known for his works 'Introduction to Arithmetic' and 'Manual of Harmonics.' His Manual of Harmonics was addressed to a lady of noble birth, at whose request Nicomachus wrote the book, which suggests that he was a respected scholar of some status. This is the first important music theory treatise since the time of Aristoxenus and Euclid. It provides the earliest surviving record of the story of Pythagoras's epiphany outside a smithy that pitch is determined by numeric ratios. Nicomachus also gives the first in depth account of the relationship between music and the ordering of the universe via the "music of the spheres." Nicomachus's discussion of the governance of the ear and voice in understanding music unites Aristoxenian and Pythagorean concerns, normally regarded as antitheses. In the midst of theoretical discussions, Nicomachus also describes the instruments of his time, also providing a valuable resource. In addition to the Manual, ten extracts survive from what appear to have originally been a more substantial work on music.