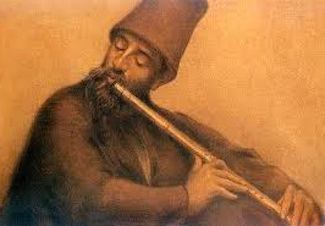 The ney that is the Persian knotgrass reed, has five finger holes in front and one thumbhole in the back. The ney has a range of two and a half octaves. The upper end is covered by a short brass cylinder, which is anchored in the tiny space between the upper incisive of the player. Sound is produced when a stream of air is directed by the tongue toward the opening of the instrument. In this way, sound is produced behind the upper teeth, inside the mouth, which gives the ney a distinct timbre than that of the sound produced by the lips on the outside of the mouth.

The gentle sound of the ney (wind instrument that produces a sound resembling the flute) calms the nervous system, reduces high blood pressure and tiredness, and promotes good sleep. The ney is believed to awaken a reflective mood, causing a person to appreciate and enjoy nature. It is linked to deep philosophical ideas.