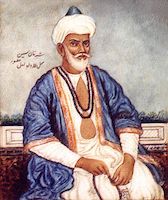 He was a prominent Hindustani classical music composer and musician. He was an extraordinarily gifted vocalist, known for a large number of compositions, and also an instrumentalist who popularized and improved the plucked rabab (of Central Asian origin). He was among the Navaratnas (nine jewels) at the court of the Mughal Emperor Akbar. Akbar gave him the title Mian (an honorific, meaning learned man). His contribution to the world of music is priceless and is still worshiped by leading singers and composers of the world.