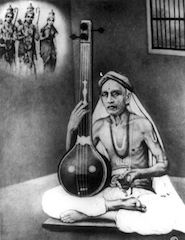 Kakarla Tyagabrahmam, colloquially known as Tyagayya and Tyāgarājar, was one of the greatest composers of Carnatic music or classical South Indian music. He is known as the 'pithamaha' (godfather) of carnatic music. He, along with his contemporaries Muthuswami Dikshitar and Shyama Shastry, forms the Trinity of Carnatic music. He was a prolific composer and highly influential in the development of the South Indian classical music tradition. Tyagaraja composed thousands of devotional compositions, most of them in praise of Lord Rama — most of which remain very popular even today. Of special mention are five of his compositions called the Pancharatna Krithis (English: 'five gems'), which are often sung in programs in his honor.

Thus, due to the painstaking labour of these musicians and researchers, there now exists a stable and definitive collection of Thyagaraja's music. Out of 24,000 thousand songs said to be composed by Tyagaraja, around 700 songs have survived.