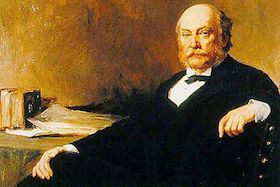 Lord Rayleigh, was an English physicist who, with William Ramsay, discovered argon, an achievement for which he earned the Nobel Prize for Physics in 1904. He also discovered the phenomenon now called Rayleigh scattering, explaining why the sky is blue, and predicted the existence of the surface waves now known as Rayleigh waves. Rayleigh's textbook, The Theory of Sound, is still referred to by acoustic engineers today.

Around the year 1900 Lord Rayleigh developed the duplex (combination of two) theory of human sound localization using two binaural cues, interaural phase difference (IPD) and interaural level difference (ILD) (based on analysis of a spherical head with no external pinnae). The theory posits that we use two primary cues for sound lateralization, using the difference in the phases of sinusoidal components of the sound and the difference in amplitude (level) between the two ears.

The rayl unit of acoustic impedance is named after him.