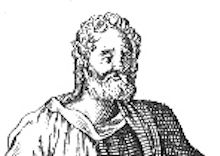 Syrian philosopher, a major figure in the philosophical school of Neoplatonism and the founder of its Syrian branch. Though only his minor philosophical works have survived, the basic elements of Iamblichus’ system can be understood from the references to his teachings in the writings of the 5th-century philosopher Proclus. He wrote, in Greek, the treatise known under the Latin name De Mysteriis ( On the Egyptian Mysteries, 1821 ). His other works include: On the Pythagorean Life; The Exhortation to Philosophy, or Protrepticus; On the General Science of Mathematics; On the Arithmetic of Nicomachus; and Theological Principles of Arithmetic.

It was through his writings, that we are aware of the inner workings of Pythagoras and the harmonic science taught by the Pythagorean's. Iamblichus mentions the invention of the Chordotonon, the precursor of the Monochord, to demonstrate ratios of sound.