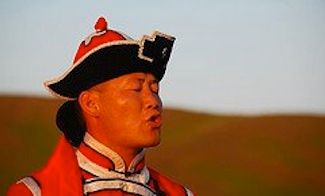 The most accessible of instruments, the 'voice' is one of the easiest instruments through which 'intention' can be directed and focused. Used to 'raise' the vibration or frequency of the body. Harmonic overtone singing developed by the Tuvans, passed to the Tibetans, has been used in ceremony, ritual, and shamanic practice for centuries. Native American Shaman use the voice in healing rituals, and singing to oneself when overcome by illness to facilitate healing. Kabbalist's chant specific vowel sounds that connect the chanter with the energies of the Divine. Sufi's use the chanting of vowels in healing work. The 3 basic sounds are the long vowel sounds of 'A','I', and 'U'. These are what the Sufis call the 'universal harmonic constants', and they are used in all mystic paths that utilize sounds. The Mayan shamans teach the creation of light through vocal harmonics. There were 'special' rooms inside their pyramids that were used to create light in, using the voice to create a high frequency of sound that could be elevated into the spectrum of light, the mayans were able to turn a dark chamber into one of radiant light. The use of the voice to balance and align chakras has been a part of Hindu Ayurvedic medicine for thousands of years. Historical evidence suggests that the Himalayan Bonpo culture was the first to use the recitation of mantras nearly 18,000 years ago.