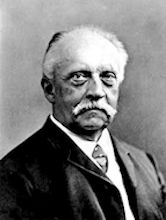 Hermann Ludwig Ferdinand von Helmholtz participated in two of the most significant developments in physics and in the philosophy of science in the 19th century: the proof that Euclidean geometry does not describe the only possible visualizable and physical space, and the shift from physics based on actions between particles at a distance to the field theory. Helmholtz achieved a staggering number of scientific results, including the formulation of energy conservation, the vortex equations for fluid dynamics, the notion of free energy in thermodynamics, and the invention of the ophthalmoscope. His constant interest in the epistemology of science guarantees his enduring significance for philosophy.

Equally distinguished were his labors in physiological acoustics. He explained accurately the mechanism of the bones of the ear, and he discussed the physiological action of the cochlea on the principles of sympathetic vibration. Perhaps his greatest contribution, however, was his attempt to account for our perception of quality of tone. He showed, both by analysis and by synthesis, that quality depends on the order, number and intensity of the overtones or harmonics that may, and usually do, enter into the structure of a musical tone. He also developed the theory of differential and of summational tones. His work on Sensations of Tone (1862) may well be termed the principia of physiological acoustics. He may also be said to be the founder of the fixed-pitch theory of vowel tones, according to which it is asserted that the pitch of a vowel depends on the resonance of the mouth, according to the form of the cavity while singing it, and this independently of the pitch of the note on which the vowel is sung.

" We perceive that generally, a noise is accompanied by a rapid alternation of different kinds of sensations of sound. Think, for example, of the rattling of a carriage over granite paving stones, the splashing or seething of a waterfall or of the waves of the sea, the rustling of leaves in a wood ".

To analyze the “rapid alternations” of these noises into their component vibrations, Helmholtz constructed the “Helmholtz resonator.” Helmholtz began by removing the bottom of an empty, uncorked wine bottle, stretching a membrane over the bottom, and fastening the membrane with a band. Then he suspended a single thread, with a bit of wax on the end, from the band so that it hung halfway down the membrane. If the thread is agitated, the bit of wax hits the membrane as a drumstick hits a drum. Based on experimental evidence and mathematical reasoning, Helmholtz argued that there will be a single tone, the “prime tone,” that is the tone at which the membrane vibrates at the highest frequency, based on the thickness and size of the membrane. By performing experiments, Helmholtz was able to distinguish the prime tones of various membranes. Then if he played music or made noise, the vibration of the membranes would reveal the component vibrations of the sound.

Then Helmholtz had the idea of constructing more sophisticated resonators, made of spheres or cylinders of glass or metal. The resonators narrow to a small, hollow point at one end, and have a circular opening at the other. Helmholtz placed a small piece of hot wax at the small end, let it cool, and then inserted it into his ear or the ear of a subject. The prime tone of such a resonator is determined by its own composition and by the sympathetic vibrations of the ear. If a sound other than the prime tone of the resonator plus ear system is played, the listener hears only muffled noises, but “if the proper tone of the resonator is sounded, it brays into the ear most powerfully” Again, using resonators allows an experimenter to distinguish the component vibrations of music or ordinary noises, by first determining the prime or proper tone of the resonator, and then determining, using the resonator, whether the music or noise contains that tone.

He contributed more to the musical aspect of acoustics than has any other individual. He analysed and explained the significance of overtones, explained combination tones and discovered summation tones; through his work on the ear he founded the present theory of hearing. He also worked on phase, wave patterns, beats and their role in consonance and dissonance, and temperament systems, built harmoniums and improved previous acoustical instruments. His classical work on acoustics (1863) was translated by A. J. Ellis as " On the Sensations of Tone.' (1875).