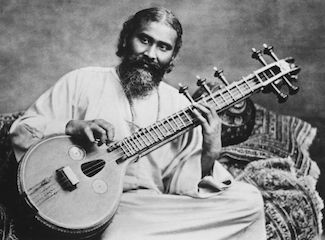 " The physical effect of sound has also a great influence upon the human body. The whole mechanism, the muscles, the blood circulation, the nerves, are all moved by the power of vibration. As there is resonance for every sound, so the human body is a living resonator for sound. Although by one sound one can produce a resonance in all substances, such as brass and copper, yet there is no greater and more living resonator of sound than the human body. The effect of sound is upon each atom of the body, for each atom resounds; on all glands, on the circulation of the blood and on the pulsation sound has its effect."

Hazrat Inayat Kahn is probably the best known teacher of Sufism in America and Europe in the 20th century. A tireless teacher, writer, and lecturer traveling and lecturing almost continuously for seventeen years. He had established his school in France, and a dedicated group of disciples. But, his difficult schedule had weakened him over the years. He left for India to see his homeland for the first time in seventeen years. He hoped to rest and meditate but was asked to lecture and graciously consented as was common. He died in New Delhi in 1927 of influenza.

" The mystery of sound is mysticism; the harmony of life is religion. The knowledge of vibration is metaphysics, and the analysis of atoms science; their harmonious grouping is art. The rhythm of form is poetry, and the rhythm of sound is music. This shows that music is the art of arts, and the science of all sciences, and it contains the fountain of all knowledge within itself."

A virtuoso on the Veena, he was bestowed the title of 'Tansen' from the Nizam of Hyderabad, but he soon turned to the introduction and transmission of Sufi thought and practice.