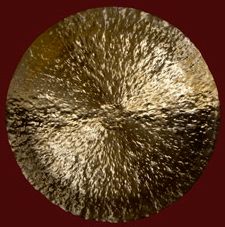 Gongs are percussion instruments of either definite or indefinite pitch, in the form of a metal plate usually made of brass or bronze, and are of two types; hanging (vertical), or resting (horizontal). They are either flat with a clear sound, convex with a supple wall, or convex with a nipple or knob with a strong wall and definite pitch. They may be described as being a wind, chau, tam-tam, nipple, cup, bowl, plate, rin, orchestral, symphonic, whirling, ascending, or descending type of gong. The major gong centers of the world are China, Burma, Java, Indonesia, and Turkey. Communities of gongmakers exist in Sumatra, Thailand, Korea, Japan, Vietnam, Nepal, and India. Gongmaking was known to the ancient Egyptians, Greeks, Romans, Persians, Mongols, and Uighers. The gong is mentioned in writings during the 6th century in the time of the Emperor Hsuan Wu, originating in the country of His Yu in the western area in what was the Jang Kingdom between Tibet and Burma. In 496AD there is a mention in Chinese writings that a Gong came to the Imperial Palace from East Turkmenistan via the Silk Road. Evidence suggests that gongmaking was known as early as 3000BC and ancient alchemy sources put the gong as far out as 16000BC.

Today the alloy formula of a gong is called B-20 which means 80% copper and 20% tin. Gongmakers can use an alloy recipe, which may contain 70-80% copper and 20-30% tin, with the addition of silver, lead, nickel, iron, zinc, or meteorite depending upon the tradition of the gongmaking. Chinese gongs generally are made of a 75.52% copper, 22.43% tin, .26% lead, and .23% zinc, .81% iron alloy. The Zildjian Company of Turkey uses a Bronze Age formula that Avedis the alchemist from Constantinople brought to Istanbul in 1623. Gongs were introduced to the European orchestra in 1791. Piaste the cymbal maker from Zurich, Switzerland keeps a Bronze Age formula for gongs, which they still use today. Over the past decade, gong making in Turkey has been revitalized by numerous small gong making businesses offering handcrafted gongs.

Gongs are considered to be a good luck charm, and touching a gong is believed to bring a person happiness, good health, and strength. In India it is believed that the sound of a gong created the worlds, and was the primal sound of OM. The gong is a powerful and transformational instrument of sound, which has been used for ritual, ceremony, prayer, and meditation since the Bronze Age. Its sound is relaxing and calming, centering and energizing, transforming and healing. The gong resonates all the cells of the body simultaneously and is useful in resolving emotional and physical dissonance.