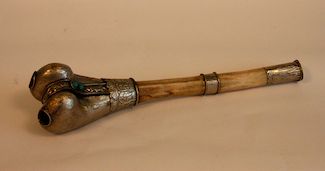 Made of the human thigh bone, the 'spirit evoking' trumpet known as the Kangling. A ritual object of Tantric Buddhism, and used at the time of tantric ceremony. Used in the Chod ritual 'Cutting off of Ego', and various dubthab rites. The Chod ritual appears to have its source during the shamanistic Bon period of Tibet, in the animistic cults relating to sacrifice and exorcism.

Played with the LEFT hand, and sounded in conjunction with the double-sided hourglass shaped drum made from a pair of human crania the Damaru. Because of their special qualities, they tend to be used in rituals concerned with wrathful deities or in contexts requiring special musical expedients. Used to drive away evil spirits, and used by 'naldjorpas'(adepts of the Short Path), to 'summon' spirits.

Used in conjunction with a Phurba (ritual dagger) for weather control in the summoning and cessation of rain.