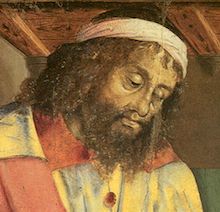 Euclid of Alexandria, was a Greek mathematician, often referred to as the "Father of Geometry". He was active in Alexandria during the reign of Ptolemy I (323–283 BC). His Elements is one of the most influential works in the history of mathematics, serving as the main textbook for teaching mathematics (especially geometry) from the time of its publication until the late 19th or early 20th century. In the Elements, Euclid deduced the principles of what is now called Euclidean geometry from a small set of axioms.

Euclid's algorithm is a way of finding the highest common factor of two numbers. The algorithm is called Euclidean because it appears in Euclid's Elements as proposition 1 of book 7. It can be useful in all sorts of situations. But what has it got to do with music?

Right from the time of Euclid, and even before, there has been a mathematical way of talking about music. Musicians talk about pitch, that is how high or low a note is. You can visualise this as how high or low it appears on a stave, or how far to the right or left it would be on a piano. Today scientists use a sound's frequency to describe its pitch in mathematical terms: for example the middle A on a piano usually has a frequency of 440 cycles per second. This simply tells us how many individual sound waves there are each second in that sound.

Before the concept of frequency was discovered mathematicians talked instead about the length of a string that would produce a particular note. Obviously the note a string produces depends not just on its length but also on its tension and its density. (You can see this with a guitar, where the strings are all the same length: the pegs adjust the tension, but you can also see that the lower notes are generally produced by thicker, heavier strings). But if you keep the tension and density constant, changing the length changes the pitch in a predictable way.

These correspondences were known to musicians in ancient Greece. They had made the fundamental observation that pairs of strings whose lengths make exact simple ratios — like 2:1, 3:2 and 4:3 — sound good together. Other pairs of strings which do not have such a relationship generally sound discordant. From then until about the seventeenth century it was common — at least among people interested in the mathematics of music — to use these ratios as the definitions of the simplest musical intervals.