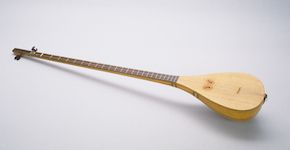 A two stringed instrument played with arpegios. It originated among the Kazakh and Kyrgyz and was the special instrument of the Baksi Shamans. Also known as a Dombra. The Dutar is employed in a sacred dance known to the Altai shamans, which spread through central Asia, and was adopted by some Sufi orders. This dance has good results on autism in geriatrics, oncology, immunology, neurology, cardiology. It is effective against depression and anxiety.