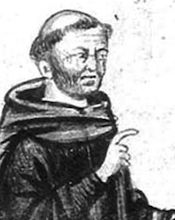 A Tunisian doctor of the eleventh century. The first part of his life was spent in Tunisia and the rest in Italy. In Salerno, Italy, he became a professor of medicine and his work attracted widespread attention. A few years later Constantine became a Benedictine monk, living the last two decades of his life in the Monte Cassino monastery.

It was in Italy where Constantine compiled his vast opus, mostly composed of translations from Arabic sources. He translated into Latin books of the great masters of Arabic medicine: Razes Ali Ibn Massaouia Baghdad, Ibn Imran, Ibn Suleiman, and Ibn Al-Jazzar. These translations are housed today in libraries in Italy, Germany, France, Belgium, and England. They were used as textbooks from the Middle Ages to the seventeenth century.

It was through these translations, that the music therapy of the Arab world was introduced to Europe, most importantly his translation of the 'Viaticum', where he introduces the Arab concepts of the use of music in Astrology, Philosophy, and Medicine.