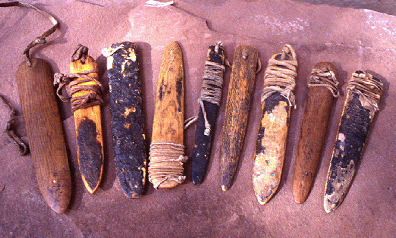 Known as the 'voice of God' to the Australian Aborigines and given to the males of the Clan at naming ceremonies or other auspicious occasions. Used as a 'talk back switch' to the Creator. To sound a Bullroarer it is swung lasso style which causes it to spin and make a 'humming type' sound. It is called by several different names including 'Burliwarni','Ngurrarngay',and 'Muypak'. They were used to display sacred symbols and sounded to warn the uninitiated that they were being shown. They were also used to send animals into ambush, and to alert one tribe of anothers presence, and in rainmaking ceremonies. Their bullroarers or sacred tunduns, are of two types, the grandfather or man tundun, distinguished by its deep tone, and the woman tundun with a weaker shriller note.

This type of instrument has been used all over the world. To the Maori it is called 'Purerehua'(butterfly), and it was used by North American Native Cultures from the Athabaskan, Nootka, Yokuts, Pomo, Hopi, Aztec and more. The Navajo call it the 'groaning stick' (tsin di'ni) and use it to drive away evil or drive out illness. Made from pine wood that has been struck by lightning, covered with yucca pitch, and attached to a cord made from bighorn or buckskin. During Navajo sacred ceremonies, the medicine man uses the bullroarer to slice through the air, creating an opening that allows the Yei B'Chei (diety) to enter the physical world. At certain Moqui ceremonies the procession of dancers was led by a priest who whirled the bullroarer. In New Guinea it was placed inside humanlike effigies in the throat area symbolizing the spirit voice of the effigy and was sometimes used in ceremony. Among the Egba tribe of the Yoruba race the supposed Voice of Oro, their god of vengeance, is produced by the bullroarer, which is actually worshipped as the god himself. Used as a fishing charm in the Torres Straits, and in Sri Lanka in Buddhist festivals. Sometimes, as among the Minangkabos of Sumatra, it is made of the frontal bone of a man renowned for his bravery.

Known as the 'Groaning Stck' or tsin ndi'ni' to the Navajo, and the 'Sounding Wood' or tzi ditindi to the Apache. The sound that the Bullroarer makes is sacred to the Apaches, within their culture it is not to be displayed or whirled outside of sacred circles. The Gros Ventre also had a version called the nakaa ta. Nearly all North American First Nation groups used this sound tool.