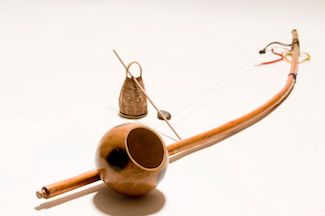 A descendent of the musical bow or 'mbela' of central Africa. Known to the Mandinka of the Angola area as 'Kabuni', and used by medicine men and women in their healing rituals. Used as an accompaniment of storytellers and singers. It was also used by the Bantu and Yorubas of Mozambique and Nigeria, and by the Zulu who call it 'Ugubhu'. The instrument has been played in Africa since prehistoric times, and was taken to Brazil by African slaves, and is now widely used as the traditional instrument of Capoeira; which is a martial art, dance, and spiritual discipline. The name Capoeira is a Brazilian Indian word given to a small partridge whose male is very jealous and engages in fierce fights with its rivals.

In Cuba, where the berimbau is called 'Borumbumba', 'Sambi', 'Pandiguaro', or 'Gorokikano', it is used in Afro-Cuban ceremonies to talk to the souls of the dead.

On the island of Guam it is called 'Mbilimbau'.

A wire is tied to one end of a wooden pole, and the pole is flexed, and the wire secured to the other end. A gourd resonator is attached using a piece of thin rope that goes through the gourd, and the gourd is slid onto the taunt bow. It is played with a wooden stick which holds a basket shaker in the palm, and holds a small stone clasped between the index finger and the thumb. The stone changes the pitch by being pressed into the wire bowstring. Pitch is also controlled by moving the resonator gourd in and out from the body.