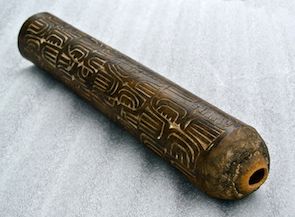 Ceremonial wind instrument of the last indigenous tribe of New Guinea ( Irian Jaya ). The Asmat ( tree people ) tribal culture occupies the southwest coastline now known as West Papua, Indonesia. A type of bugle or trumpet made of bamboo and carved on the exterior by using the tooth of a rat (shell can also be used ). Used as a signaling device during headhunting raids to instill fear or to paralyze the enemy. Used during 'feast cycles' and played in the 'lead' canoe, and blown to signal the return to the village. The fue is wrapped in a pandanus leaf and stored above the central hearth ( boiyir ) in the Bachelor's House or the family home which is a stick and leaf structure raised on stilts. According to Asmat legend, the Arch-Woodcarver Miroko-atayao was the only survivor after all the people in the world had been devoured by a gigantic crocodile. As he hunted and fished he 'found' the most important animals and 'created' a series of 6 ceremonial houses by drawing them in the sand. He also encountered the gigantic crocodile (eu ), which made a strange roaring noise. This is the sound of the Fue. When a woodcarver carves the Fue, it is said that he gives the wood life. The bamboo signal horns were often used as pillows, in case of danger they were within reach to be sounded instantly.

Wow-Ipits by Adrian A. Gerbrands

* We want to thank Steve Chiaramonte of Salt Lake City for his invaluable assistance, and providing information regarding this instrument.