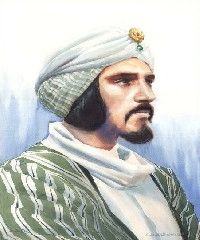 The first of the Arab philosophers to have dealt with music, al-Kindi, thought its effects were of 3 sorts: those that dilated the movements of the soul, those that contracted them, and those that calmed them. In addition to theories on the ethos of modes, the harmony of the spheres, and the efficacy of numbers, al-Kindi also proposed a theory on the relation between sounds and the 4 elements, the 4 seasons, the 4 humors. The power of music could thus be explained, according to him, through a vast set of psychological, physiological, and cosmological causes. He is known to have written fifteen treatises on music theory, but only five have survived. He added a fifth string to the 'Ud.

Al-Kindi was a master of many different areas of thought. And although he would eventually be eclipsed by names such as al-Farabi and Avicenna, he was held to be one of the greatest Islamic philosophers of his time.

The Italian Renaissance scholar Geralomo Cardano (1501–1575) considered him one of the twelve greatest minds of the Middle Ages. According to Ibn al-Nadim, al-Kindi wrote at least two hundred and sixty books, contributing heavily to geometry (thirty-two books), medicine and philosophy (twenty-two books each), logic (nine books), and physics (twelve books). His influence in the fields of physics, mathematics, medicine, philosophy and music were far-reaching and lasted for several centuries.