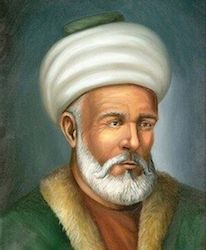 Abu Nasr Muhammad ibn Muhammad ibn Tarkhan ibn Awzalagh al-Farabi may rightly be acclaimed as one of the greatest of Islamic philosophers of all time. Al-Farabi was known to the Arabs as the 'Second Master' (after Aristotle), and was 'the founder of Arab Neo-Platonism and the first major figure in the history of that philosophical movement since Proclus'. Farabi also participated in writing books on early Muslim sociology and a notable book on music titled 'Kitab al-Musiqa' (The Book of Music) which is in reality a study of the theory of Persian music of his day, although in the West it has been introduced as a book on Arab music. He invented several musical instruments, besides contributing to the knowledge of musical notes. It has been reported that he could play his instrument so well as to make people laugh or weep at will. Al-Farabi’s treatise 'Meanings of the Intellect' dealt with music therapy, where he discussed the therapeutic effects of music on the soul.

Although many of his books have been lost, 117 are known, out of which 17 are on music. Hermann Von Helmholtz remarked that Farabi's musical scale may have been the most perfect scale of music ever devised, and Roger Bacon remarked that Farabi may have been the most influential philosopher to emerge from the Arab world. Today many traditional doctors from Istanbul, through Azerbaijan, to Mongolia, still use Farabi's books on music therapy as part of their traditional treatments, and a University in Kazakhstan is named after him.

From Turko-Persian historical cultural roots, Al-Farabi and other scholars of Khorosan made a fundamental contribution to Arabic literature, producing Arabic translations and interpretation of Aristotle, Plato, and other ancient classics at a time when Medieval Europe had neither knowledge of the Greek language nor a taste for this culture. Two hundred years later Al- Farabi’s works, translated into Latin, inspired and stirred Europeans toward the Risorgimento and later movements marked by fascination with and appropriation of ancient Greece as the origin of Western cultural history.

A founder of political philosophy, Al-Farabi was a music theorist and a performer, an Ud player (praised as the inventor of the 5-string Ud). Among his surviving writings on music are treatises on tuning, rhythm, and the philosophy of music (Kitab fi ’l Nuqra, Kitab al ti Ihsa al-iqa, Kitab fi ’l Musiqa) as well as a monumental work, The Grand Book on Music,' Kitab al-musiqi al-kabir.' One of his innovations was to fret each string, in order to precisely tune string instruments, which had never before been considered.

His treatise on music, proving the connection of sound with atmospheric vibrations and mocking the Pythagorean theory of the music of the spheres, made him famous. " What the Pythagoreans believe about the heavenly bodies and the stars, that by their motion they produce harmonious tunes - that is false. It has been outlined in the science of Nature that what they claim is not possible, for the heavens, the spheres and stars cannot produce sound by their movements."

Farabi's view of the origin of music is in marked contrast to the one held by Al-Kindi and the Ikhwan al-Safa. According to these, human music originated when the Sages, and in certain passages Pythagoras is singled out, heard the celestial music and set down the rules for human music. These were then given to others, and eventually music spread to all. This has all the earmarks of myth, and we do not mean that in a negative sense. By contrast what Farabi offers, to be followed by Ibn Sina log similar lines, is a natural or naturalistic explanation.

" Music is a product of certain instinctive dispositions, " according to Farabi. " One of these sources, itself instinctually rooted, is poetry which has been implanted in humans ever since the creation of the species. Poetry is a natural soil for music. The one just glides into the other. A second such instinctive source is the natural disposition of both humans and animals to use sounds for expressing the pleasant and unpleasant states and experiences they go through in life."