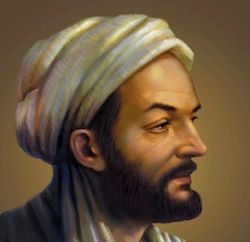 Commonly known as Ibn Sīnā or by his Latinized name Avicenna, was a Persian polymath, who wrote almost 450 treatises on a wide range of subjects, of which around 240 have survived. In particular, 150 of his surviving treatises concentrate on philosophy and 40 of them concentrate on medicine. He wrote about natural philosophy and astronomy, theology and metaphysics, medicine, psychology, music, mathematics and physical sciences and he is also the reported author of Persian quatrains and short poems.

Ibn Sina also contributed to mathematics, physics, music and other fields. He explained the "casting out of nines" and its application to the verification of squares and cubes. He made several astronomical observations, and devised a contrivance similar to the vernier, to increase the precision of instrumental readings. In physics, his contribution comprised the study of different forms of energy, heat, light and mechanical, and such concepts as force, vacuum and infinity. He made the important observation that if the perception of light is due to the emission of some sort of particles by the luminous source, the speed of light must be finite. He propounded an interconnection between time and motion, and also made investigations on specific gravity and used an air thermometer.

In the field of music, his contribution was an improvement over Farabi's work and was far ahead of knowledge prevailing elsewhere on the subject. Doubling with the fourth and fifth was a 'great' step towards the harmonic system and doubling with the third seems to have also been allowed. Ibn Sina observed that in the series of consonances represented by (n + 1)/n, the ear is unable to distinguish them when n = 45. In the field of chemistry, he did not believe in the possibility of chemical transmutation because, in his opinion, the metals differed in a fundamental sense. These views were radically opposed to those prevailing at the time. His treatise on minerals was one of the "main" sources of geology of the Christian encyclopaedists of the thirteenth century.