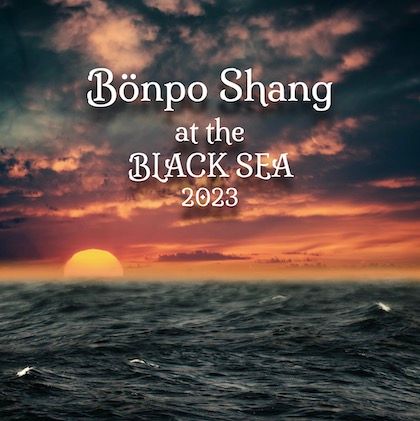 Bonpo Shang Transmission and Initiation at the Black Sea

The Turkish authorities are exercising certain Visa protocols for this program, at the present time; because of this, we have initiated certain changes in the program itself and locations that will host this serious program of study.

The Bonpo Shang is one of the world's oldest ritual Sound Tools, and quite possibly the oldest metal sound tool, dating back to the pre-Imperial Period of the ancient kingdom of ZhangZhung.

Today's Yungdrung Bon tradition attribute the Shang to the founder of Bon, Tonpa Shenrab. The instrument existed at the time of Lord Shenrab (16,000BC according to some historians ), and may be considerably older according to sources in the Bon community. The instrument is found in other shamanic traditions in the Himalayan region of Tibet, Bhutan, Nepal, Yunnan, Tuva, Mongolia,and as far north as the Buriyat Republic.

Why is this important? According to Dr. Mitch's research, "the upturned flat bell may be the only authentic sound healing instrument. There are numerous texts in the monasteries attesting to this which include how it is to be made, how it is played, and by whom. Every antique Shang found in museums confirms this (very few Shangs available today are authentic-fakes) and ONLY "knowledge holders" should be wielding it." Precise instructions found in authentic ancient texts with just one purpose - to heal with sound. As Dr. Mitch states " no other instrument used in sound healing can make this claim." Joining Mitch is Umzey Zeny who leads the early morning 'spiritual practice' and Nancy who leads the 'exercise' practices. These 3 are tasked with your training to make it as real and meaningful as possible, which takes you back before Tibet existed, before Buddhism, before the Yungdrung Bon, at a time of the Shen.

Innerview: A Deep Dive with lots of practice time, expect to be stretched to the limit. Classes begin at 4:30am with an authentic practice based upon research, study, and interviews with nearly 3 dozen Lamas and Throne Holders. Dr. Mitch's Root Teacher was Tantric Bon, Zhiney (meditation) with the 33rd Menri Gyalwa (including Powa), Sutra studies with numerous Dzogchen teachers, Long Life Initiation and Empowerment (awarded the title of Drup Shen Pa), Powa Initiation, Empowerment and Result with the Abbot of Osel Samten Ling (Nyingma Throneholder).

Outerview: This is the most comprehensive training program on this instrument in the world today. The program covers the uses and knowledge contained with the Bonpo culture, and then extends further into the shamanic uses by the lha-pa, dpa-mo, and lha-beb priests; as well as the uses by the Bomba, Paju and Naxi.

We will explore pre-Tibetan history and the belief systems surrounding the Drala and the Werma, as well as Naga. These ancient constructs will become the Focal Plane as we navigate a esoteric Timescape with traditional practice protocols from the period of the Shen.

A short practice will be introduced by Mitch Nur, PhD based on 'traditional Bon practices,' these instructions assist in the 'pointing of the mind' or the 'leaning in' to working with this instrument. Students are required to engage this practice as well as this Transmission with a 'fire in the heart.' Research for this program contains elements from the Northern Treasury or mDo and Po Ti texts.

From Mitch Nur, PhD: “The “historical ground” for this Transmission is examined through the eyes of the Shen; which dates it prior to Shen Bon and the Yungdrung Bon periods. At the time of the historical Buddha in this pre Imperial period, the Shang was already in existence according to Bon historical records. To present this instrument accurately one must be tasked with extensive research into some of the oldest philosophical texts in Asia dating to at least 16,000BC. In this case, we are focused on the Northern Treasury texts, and specifically the Po Ti. For reference, today's Yungdrung Bon is focused on the Southern Treasury presentation, and the Shang becomes a cymbal to mark a passage, rather than its intended use of being used by only the ‘knowledge holders’ for the purpose of healing. Numerous texts address how they are made and used, that have been discovered in at least three different locations around Tibet. Today they are used by spirit mediums and indigenous priests from southwest China, across the Tarim Basin to the Pamir’s. Not only is this a historical adventure into lost lands, but thrusts the student into ancient indigenous practices, performed by studies into the divine Feminine being practiced by a pre Buddhist tradition, long long ago. The purpose of the Shang, as an upturned flat bell whose ring could be heard for 10,000 years, was to remove obstacles, heal the earth and those humans afflicted with illness and disease, and to expel the oath breakers and apostates who only bring suffering through their false understanding of doctrine. I have added a complete spiritual practice based upon authentic texts, that is intended to act as a fragrance of being in ancient times. Some of the oldest mantras associated in this ancient matriarchal system are strung like a necklace in order to bring you face to face with the oldest sound healing instrument and how to use it like they did thousands of years ago.”